The objective of the Alley Flat Initiative is to create an adaptive and self-perpetuating delivery system for sustainable and affordable housing in Austin. The “delivery system” includes not only efficient housing designs constructed with sustainable technologies, but also innovative methods of financing and home ownership that benefit all neighborhoods in Austin. 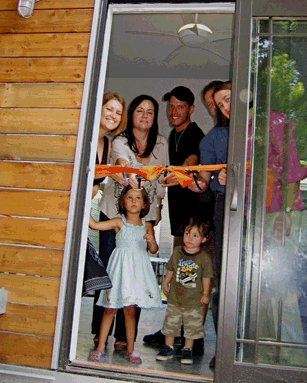 Guadalupe Neighborhood Development Corporation (GNDC) a 501(c)3 non-profit, is a key provider of affordable housing alternatives in Central East Austin neighborhoods. The organization’s mission is to utilize its resources to develop and rehabilitate high quality affordable housing for low- to moderate- income families. To the Initiative, GNDC brings long-standing community relationships and experience developing affordable housing in an urban context.

University of Texas Center for Sustainable Development (UTCSD) contributes to the study and practice of sustainable development in Texas, the nation and the world through complementary programs of research, education and community outreach. As a AFI collaborator, the UTCSD focuses on research and policy related to affordable housing, secondary apartment development, and distributed infrastructure.

With thousands of available sites in Austin’s central core and the desire of many households to build an accessory dwelling unit, the Alley Flat Initiative is a key program for meeting the rapidly growing need for affordable housing in Austin.

The Alley Flat Initiative began in 2005 thanks to a generous grant from the Henry Luce Foundation to the UT Center for Sustainable Development. Principle Investigator and UT Professor Steven Moore launched the project and soon recruited University of Washington Professor Sergio Palleroni to lead the Sustainable Design and Development Workshop (SDDW) that would ultimately conduct the research and develop the prototypes. In the first year, the SDDW developed two key partnerships with the Blackland Community Development Corporation and the Guadalupe Neighborhood Development Corporation (GNDC), two organizations at the forefront of the affordability movement in Austin.

Through interviews and extensive on-the-ground research, the SDDW students were quickly able to identify a network of deserted and underutilized alleys throughout East Austin. Due to a lack of budgetary resources, the City of Austin had long abdicated responsibility to maintain these alleys and as a result, they were often overgrown and abandoned. At the same time, detailed survey calculations revealed that many of the residential lots facing these alleys were quite sizeable and that the ratio of building-to-site was minimal, creating a unique development opportunity.

Working in partnership with the two development corporations, the students of the SDDW developed preliminary concepts for an initiative to build “Alley Flats” on these lots. Investigation into neighborhood zoning restrictions revealed that these secondary dwelling units were permissible and were in fact advocated for by the Guadalupe Neighborhood Plan. The SDDW students conducted extensive research into other similar initiatives around the United States, including Santa Monica, Boulder, Seattle and Portland, and found that these were the most well-publicized examples of a growing national movement (see New York Times article “The Apartment Atop the Garage Is Back In Vogue,” Dec 2 2006, by Janny Scott).

Following the extensive research of year one, in year two the students in the SDDW began working on the prototype designs. Leveraging the research and innovation of other UT design studios, including the Civic Environmentalism Workshop, the East Austin Trapezoid study and the UT Solar Decathlon house, the students were able to develop designs that utilized the most cutting-edge environmental systems. By spring 2006, the SDDW had identified two clients with whom to work with to build the first Alley Flat prototypes. The first Alley Flat was completed in June 2008 for a private homeowner in East Austin. The Alley Flat first served as a dwelling unit for the homeowner’s sister and was then rented out to someone else as a source of extra income for the homeowner. The prototype features a number of green features including PV solar arrays, rainwater collection barrels, and clerestory windows which allow for cross-ventilation and plenty of natural daylight. The second Alley Flat was completed in August 2009. It was built for GNDC, as a secondary dwelling unit in the backyard of one of its properties in East Austin.